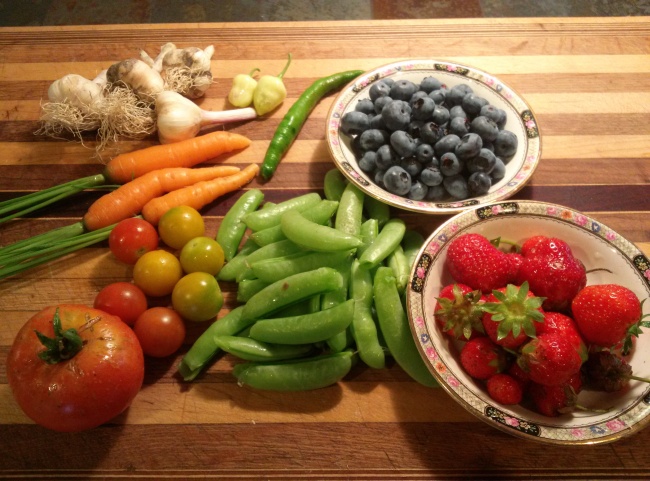 It’s that time of the year when a quick evening browse around the garden with a cocktail yields a colorful basket of produce.  For a little while this early summer, I could get away with gathering into my upturned shirt, but with the warmer days and rainy afternoons, the harvest has begun in earnest, and I try to remember to bring out a basket along with my drink.  Garlic and green onions, early tomatoes, blueberries and strawberries, carrots, early beets, peas and peppers are all coming in by the handful.  I always try to balance my desire for fresh produce with the realization that if I leave it a while longer, it will grow bigger, but there is nothing like the taste of sweet baby carrots and tender beets steamed with a bat of butter on a steamy summer evening.  My favorite dish of the early summer is, of course, a simple salad of fresh newly picked veggies.  The thinly sliced Peruvian white habanero adds a super kick to this tasty dinner. 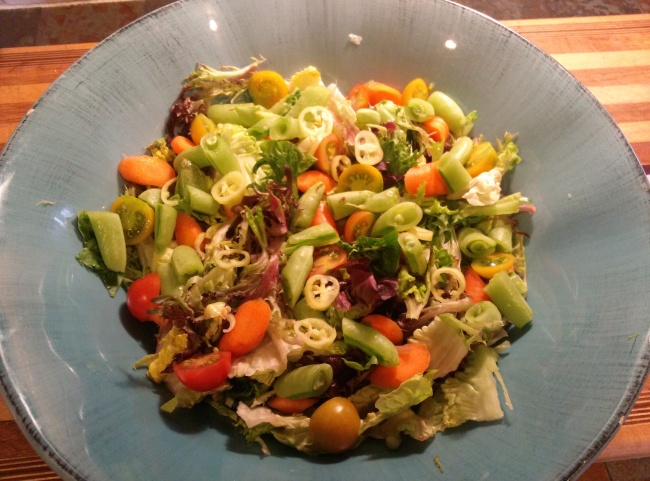 I am surprised to see the blueberries ripen so early this year, as I usually think of late July as blueberry season, but I predicted this to be the year of the berry, and it seems I have called it right.  Even the tangy and delectable wild black raspberries in the hedgerow are beginning to ripen early, and I got a sticky purple handful this morning for my trouble.  Unfortunately, as they grown amongst the nettles, I also got a prickly wrist.

On another note, for those of you who read “the Doctor is in”  I’m happy to report that my pepper plants are all thriving.  Many of them lost all their dark green foliage to the cold snap we had in May, but the smaller, lighter green leaves are beginning to thicken out the plants, and on many there are the first blooms.  Some did better than others and are already fruiting, hence the spicy salad, but most peppers like the heat, and will produce best from late July into early September.  During this pepper heyday, you will find me in the kitchen, gloves on, chopping peppers for hot sauces and salsas as fast as I can.